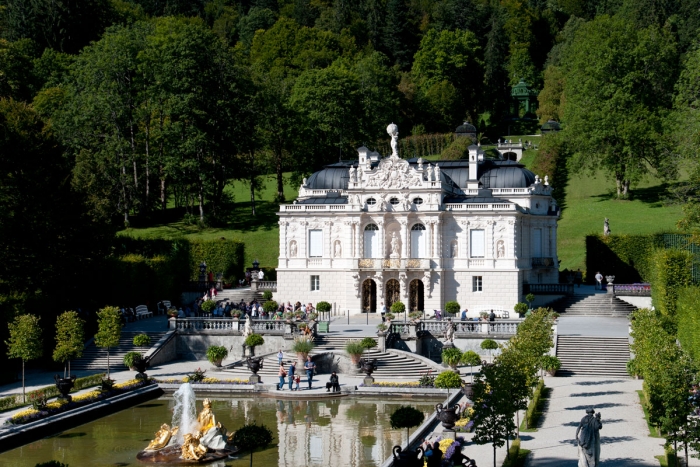 Linderhof Palace and its surrounding park is one of the most artistic and stylistically complex ensembles of the 19th century. The ‘Royal Villa’ is the only palace King Ludwig II of Bavaria (1845–1886) was able to complete (1878). It is influenced by French architecture and modelled on the small summer palaces, usually set in parkland, that were built in France in the 18th century and were also often to be found in Germany in the parks of larger palaces. Behind the Baroque façade is a Rococo world with motifs from the age of Louis XV of France. Ludwig’s creation in the Second Rococo or Neo-Rococo style, however, shows a strong South German influence: Ludwig took over a great deal from the Rococo legacy of his own ancestors with which he was familiar from his childhood, such as the Amalienburg in Nymphenburg and the Ornate Rooms of the Munich Residence. The rich and abundant ornamentation, with its many sculptural elements, is thus not merely an attempt at imitation. In Linderhof Palace Ludwig II created rooms of such sumptuousness that they far surpass everything that inspired them, as well as showing workmanship of an incomparable artistic quality.

The Linderhof Palace park is among the most outstanding of its era. It combines elements of the French Baroque garden and the English landscape garden. The terraces on the central and horizontal axes of the palace with their water basins and geometric flower beds, the long cascade with its elaborate fountains and the two focal points, the pavilion and the Venus Temple, are Baroque motifs. The natural, irregular design of the surrounding park with the exotic buildings is based on English models. The Moroccan House and Moorish Kiosk are examples of the Oriental trend that was also cultivated by Ludwig II. The three ‘stage sets’ in the park, Hunding’s Hut, the Hermitage of Gurnemanz and the Venus Grotto, stem from Ludwig’s enthusiasm for the operas of Richard Wagner. The mountain backdrop is incorporated into this brilliant synthesis of the arts by means of visual axes and kilometres of paths which lead far up into the mountain forest.